It is an incredible experience to visit any winegrowing region during harvest, and there is something quite magical about doing so in Champagne. The history of the region is impossible to ignore – literally carved into the chalk walls of the crayères – and brings with it a sense of purpose, reflection, and cautious optimism. Though it can be a very busy and stressful time for the winemakers, I felt very fortunate to make my first visit during the 2022 harvest. To cut right to the chase, the quality, quantities, and morale were high. When I arrived at the end of August, operations were already underway and in full swing moving into the first days of September. Officially the harvest began on August 20. The release of tension and anxiety was palpable across the region as I met with the winegrowers and winemakers, all of them thrilled with the quality they were seeing in their fruit, particularly coming off the heels of the significantly challenged 2021 vintage. On September 1, I was able to spend the day with Jean-Baptiste Lecaillon, the cellar master of Louis Roederer, in their press house and vineyards. We met in Roederer’s south-facing amphitheater-shaped vineyard in the village of Cumières, in the Vallèe de la Marne. Harvest was underway for the grapes that will become the 2022 Louis Roederer & Philippe Starck Cuvée. Considering the unusually high temperatures across France this summer (not to mention the worst drought on record), I was initially surprised to see that the foliage in the vineyard was flush with greenery and healthy cover crops. There was little evidence of slowing growth in the vegetation or the vines having shut down in any way. July was France’s driest month on record between 1959-2022, according to Mateo France. Jean-Baptiste noted that despite the drought in July, the water tables remained full from the preceding vintage and were helped by a cool, late spring as well as replenishing rains at key moments in June and August.

The Starck Brut Nature bottlings are only produced in warm vintages and where the conditions permit for the three varietals of Chardonnay, Pinot Noir, and Meunier to be harvested at the same time then pressed together. (In vintages where they decide not to produce the Starck Cuvée, they harvest each varietal separately to use in the Collection edition.) It was special to observe the harvest process under the collective hands of the Louis Roederer team. The Cumières fruit was pristine, with hardly any grapes to sort out in the vineyards. This was especially notable for the red grapes, which were jewel-like in appearance and bursting with sweetness. Further south, we traveled to Avize in the Côte de Blancs and observed some raisination and sunburn of the Chardonnay, although the overall quality was similarly high.

Higher pH levels across the board can certainly lower potential acidities in the resulting wines, though as readers will see, this is no longer unusual. Cool, “classic” vintages of Champagne are increasingly few and far between. For concerned readers, I suggest you check my notes on my visit to Huré Frères in Ludes, where François Huré provided a compelling argument for the other structural components contributing to longevity in Champagne, not acidity alone, in our retrospective tasting exclusively of warm to hot vintages. A rapid increase of maturity at harvest time is another potential occurrence of note. Herve Dantan, cellar master at Champagne Lanson, writes, “Even though maturity was seen to be slightly slow just before the harvests, we saw a surprising progression of the degree of maturity due to the high temperatures during the harvests. In some areas, we started harvesting grapes at 10.5 degrees to end at more than 12.5. By looking back into the Maison Lanson archives, two vintages experienced similar maturity conditions: 1976 and 1959.” One of the resounding motifs of the vintage will be to try to preserve and capture freshness in the wines. Many of the producers who are not dogmatic about it have been leaning toward blocking malolactic fermentation in vintages such as these, and I would expect to see that trend continue. The question will be whether 2022 will prove to be a very good vintage or a truly great one.

Quite the opposite was true in 2021. This was a vintage plagued by challenging conditions all around, including frost, hail, and mildew. Harvest began on September 6 and was finished on September 27. According to the Comite Champagne, “[The anticipated loss was] 30% of the yield on account of frost, to which must be added between 25% and 30% lost to mildew. Hail damaged 500 hectares, with half that area losing the whole crop.” Thus, the bountiful nature of the 2022 vintage was even more important to refuel the depletion of reserve wine lost the previous year. 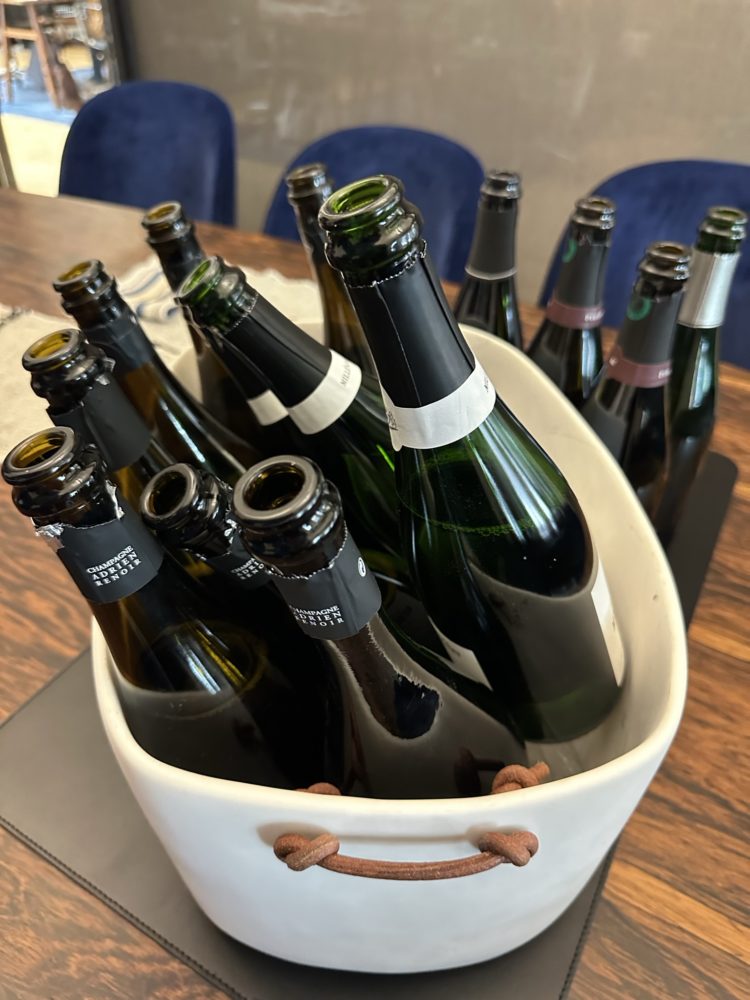 The releases coming into the market now from the long-established houses and growers young and old alike should give readers a lot to be excited about. There has also been a longer string of very good vintages over poor ones, and there are even gems to find in challenging vintages such as 2017. The single-vineyard wines of Chartogne-Taillet that I recently tasted in New York with the Skurnik team are top of mind here and certainly ones to take note of. It should be noted generally, however, that 2017 presented significant struggles with rot and botrytis, contributing to some green and unripe qualities. 2018 was an extremely high-yielding vintage with exceptional conditions, but while consistently very good, they often fall short of greatness. Like 2022, it was an essential vintage for fleshing out the reserve wines lost from the reduction in the 2017 vintage. Many of the multi-vintage wines coming into the market are based on the 2019 vintage and express a ripe style with approachability for those looking for wines to drink out of the gates. At the top end, there are some blockbuster 2012s coming into the market, full of vibrant energy and ripeness, with hats off to Salon. Some exciting new and throwback releases from several of the Grandes Marques to mention include the re-launch from Charles Heidsieck of Cuvée Champagne Charlie. Historically labeled as vintage, but widely known to have always been a multi-vintage blend, the last release was 1985. Cellar master Cyril Brun has picked up the tradition with the 2017 edition release, with 20% coming from the 2016 vintage and the large majority consisting of reserve wines going back to 1998. Emilien Boutillat is also making strides over at Piper-Heidsieck, with the second release of Hors-Serie, this time with the 1982 vintage, some of which will be packaged together with its counterpart, the 1982 Brut Sauvage, creating a new lens for identical wines disgorged 30 years apart. Over at Bollinger, there is the first vintage of La Côte aux Enfants 2012 Blanc de Noir, from the monopole parcel dedicated entirely to Pinot Noir, which will be released at the end of the year.

For lovers of grower Champagnes, there is an ever-increasing number of small production wines coming into the world, though seeking them out can take time, intel, and a fair bit of luck and persistence. But they are out there and can certainly be worth the Easter egg hunt. Rolling through the wine shops in Reims, I couldn’t help but have a “kid in the candy” store feeling, wide-eyed with glee and intrigue, and snapped up as much as I could. Champagne Guiborat and Alexandre Filaine are two I just wish I could get my hands on. The wines of Ulysse Collin, Tarlant, and Bereche are all continuing to raise the bar, with thought-provoking and compelling wines. There is so much great wine out there, widely available and not to be scoffed at. These are wines with a wide range of personalities to get you through every season, and every part of your day or night. The entry wines for many estates big or small are fantastic snapshots, revealing a lot about each house’s style, and they can be incredible values. I have tried to make note of those throughout this report and encourage readers to venture further in your explorations.

2021 Bordeaux: A Challenging Yet Good Vintage